Baseball as it exists today is the way many of have always known it our entire lives.  One of those things many of us have not experienced is racial segregation on the field,  just the best players the world has to offer playing the game we all love.   Events of the last 70 years or so have provided the opportunity for all races to play Major League Baseball and effectively end the color line within the game.  But the question has arisen as to where the segregation agreement came from.  Obviously it would be a problem in the South to have mixed races on the field, but in Northern cities it may have been a non-issue.  So when and why did this so called gentleman’s agreement come to be and for what reasoning?  Today’s book takes a look at the source of the agreement and its underlying purpose. 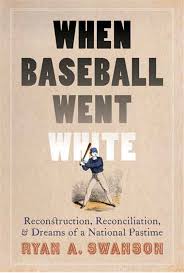 Ryan Swanson takes a look at Reconstruction Era baseball right after the Civil War.  He looks at how the constructors of the game had the desire to make it appeal to the masses as a national game.  The thought was that it would help heal some of the wounds from the Civil War and attempt to make a nation whole again.  The author pays special attention to the cities of Philadelphia, Richmond and Washington D.C., because of the large amounts of African-American residents in each city.  The theory of the book would apply to the entire league but the residential make-up of the other cities were much different at the time.

The book offers some really intense research by its author to get 19th century baseball game information.  In the end it gives the reader the notion that the reasoning behind segregating the game was  to foster national appeal.  By segregating it they would have no backlash from the southern states and would be able to accelerate the acceptance by the masses of baseball being the national game.

Quite honestly I do not have enough knowledge of this era of baseball to give a positive or negative opinion on the authors findings.  So for that matter I am accepting them at face value.  Without this agreement in place it may have in turn stunted the growth of the game itself in the eyes of Americans.  But on the flip side of that coin is the fact that so many great players were denied the right to play Major League Baseball and toiled in the Negro Leagues for so long.  One could only imagine what the record books would look like today if there was an even playing field among the races from day one.

For myself, the book read a little dry, more like an encyclopedia instead of a story. It also would have been nice to see the effects this action would have had on a more in-depth basis, as opposed to just Philadelphia, Richmond and Washington D.C..

If you don’t have an deep interest in this era of baseball history, you may want to pass on this one.  It honestly is a little dry and you may have trouble finishing it.  If you have an interest in Reconstruction Era baseball, this will help fill in some of the missing pieces from a very influential era of the game.

I am sitting here on the northern edge of a monumental blizzard that is wreaking havoc on the eastern seaboard.  While I am not lucky enough to be getting the awesome amounts of snow that the big cities are getting, at least we saw something out of this storm.  In sports and baseball in particular through the last several decades, the media outlets have exploded.  Much like this winter storm they have made an indelible mark on our society that may never be forgotten.  ESPN especially has made their mark and on sports other than just baseball.  Their self proclaimed moniker of the Worldwide Leader in Sports, holds true and may never be seriously challenged.  Now there is a book that takes an in depth look at how ESPN became the king of sports media.

Travis Vogan has taken an inside look at how ESPN has come from their roots of showing Australian Rules Football as their main programming and using ramshackle sets to becoming the go to source for all sports information.  They found a niche that obviously America wanted to fill and took advantage of that.

Travis Vogan has written a very interesting book that gives you the ins and outs of a media empire.  I realize they do more than baseball but did include them on here, because they have been able to do some innovative things through the years where the game was concerned.  They also have dedicated some serious air time to the sport, in so many different ways that other networks were not interested in doing.  They have been a great partner in helping Major League Baseball grow.

Baseball fans should check this out because it is very informative and helps you understand what they have truly given to each and every fan of the game.