There are injustices throughout the history of baseball that people have tried to remedy with varying degrees of success.  Integration was a major injustice on several levels that has been addressed within baseball.  While it has not been conquered on all levels, at least on the playing field it went as planned.  We are all familiar with the story of Jackie Robinson and Branch Rickey integrating the National League and being racial pioneers within the game.  But what about the first player on the American League side?  Today’s book takes a look at what transpired for the second racial pioneer in the game Larry Doby, and why he never got the respect, attention or praise that Jackie Robinson received only a few weeks prior. 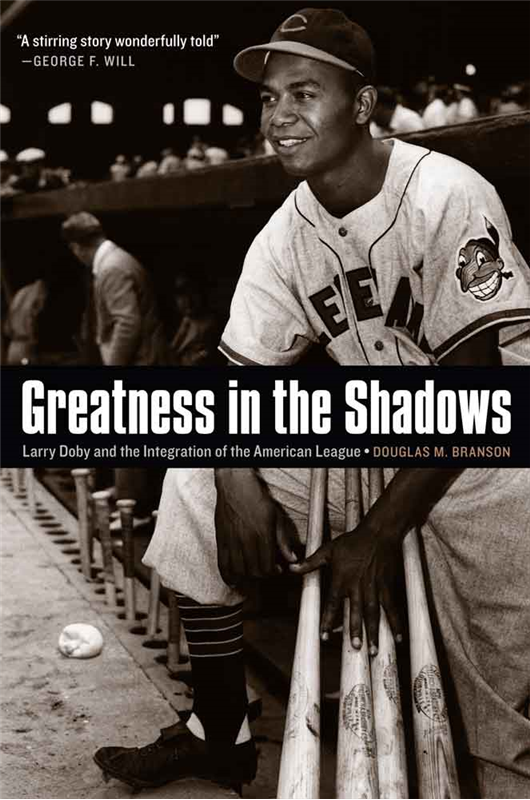 For me it is easy to understand why Larry Doby is not given as many pioneering accolades as Jackie Robinson, he was #2.  Yes he was the first in The American League, but was second under the umbrella that was Major League Baseball at the time.  No matter what the sport, being number two is never any good.  People only care about the first at whatever it is, so that was a major reason as to why Doby never got as much press at the time.  He also was in Cleveland instead of being in New York, a city with three teams which was just coming into its own golden era in the late 1940’s.  That factor alone is a big reason why many players got the coverage from the media that they did.  Doby could have been in Boise, Idaho and people could not have cared any less than they did when he was in Cleveland.  Also his relationship with owner Bill Veeck could have hindered press coverage of his career because of the disdain the other owners and the old boys network had for old sport shirt Bill.  These are just some of my ideas that I have had for a while and the book tries to prove some of these, but unfortunately does not make the grade.

Author Douglas Branson is a self proclaimed Larry Doby fan.  Finding both Doby and baseball at an early age he always felt that Doby had been slighted by the baseball gods and the media.  For various reasons I stated above he seems to want to try and prove these points through his research and other peoples writings.  He like to quote a lot of others peoples books in trying to make his case on the above points.  That method to me just felt lazy in the research of the book.    He also quotes earlier pages in the same book you are currently reading, which at times was driving me nuts.  It disrupted the flow of the book and was repetitive as well.

Factually, this book had several flaws as well.  I am not sure if it an editing fault in which the person doing it did not have a strong baseball knowledge, or if the editors felt the author’s facts were correct due to his vast self proclaimed baseball knowledge.  Either way there are several factual errors within the book.  Names, places and events were all part of the problem. There were so many errors it was embarrassing.  So many, that even the outside back cover where other authors tell you how great the book you are reading is, contained errors.  Usually from this publisher we see fewer errors and this book really surprised me on that front.

As hard as I tried I couldn’t find any redeeming qualities about this Larry Doby volume.  I really wanted this to be a good biography, since so few exist.  If you are one of those people that have to read any new book that contains anything about Larry Doby or the Cleveland Indians, then no matter what my final synopsis is you will still check it out.  But in all honestly, save your money on this, it is so riddled with errors and factual mistakes that it brings into question the entire body of work.

I think there has always been a shortage of Larry Doby material on the market, but this is not the direction it needs to take.  We need a quality Doby biography that is factually correct, and gives the man the respect he has deserved for decades.

Greatness in the Shadows