When you think of the Houston Astros in the 1970’s, one of the first names that comes to mind is J.R.Richard.  Being a tall and lanky pitcher with a blazing fastball, he combined both of these attributes to scare the crap out of hitters throughout the National League.  In an era in Houston before Nolan Ryan, Richard was the ace on the staff of the young up and coming group.  With the signing of Nolan Ryan the Astros became a force to be reckoned within the league and the sky was the limit for everyone. Then one day the glass ceiling shattered and for one player life would never be the same. 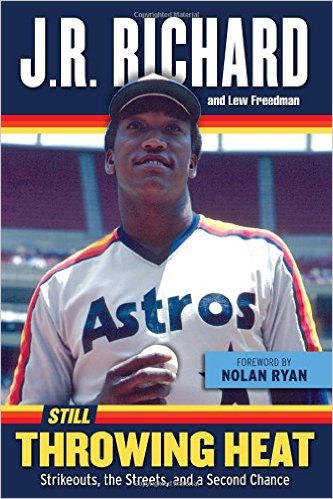 I was really looking forward to this one.  I was always a fan of J.R.’s growing up and remember him in the Astros uniforms of the late 70’s.  I remember hearing of his stroke and trying to follow his comeback as best a fan who lived in Philadelphia in 1980 could.  The translation of that last sentence means I could not follow it very well.  So between the story line and Lew Freedman working on this book I expected a winner.  I am happy to say I was not disappointed.

The book follows a back and forth format.  Each chapter starts with an overview of what that chapter is going to cover, presumably in the words of Freeman.  Then it shifts to Richard sharing his story.  It is a good format that works very well for this book, instead of trying to make it all seem like J.R. doing all of the storytelling.

The book covers a great deal of topics in Richard’s life.  It talks about his poor upbringing, his trek through the minors and then finally arriving in Houston to stay.  The biggest part of this book is of course, talking about his unfortunate stroke and the devastating after effects it has had on his entire life.  He shows you how his career was never able to be revived, how marriages failed, business dealings went bad and all the things that eventually led to him living on the streets of Houston.

One would think after all of this J.R. Richard would be extremely bitter, but I found just the opposite in this story.  He has been lucky enough to find God and get his life back on track.  He has through his faith been able to understand his past, and accept it for who it has helped him become.  It really is a remarkable story of perseverance and overcoming obstacles in one’s life.  He shows great character and is a better man than I ever could because of his outlook of his own life.  If it was me that had to struggle through all of this, I don’t ever think I could have kept the positive outlook he was able to maintain.

There has not been a lot of things published on J.R. in the past, so this book really helps fans understand what truly went on in J.R. Richard’s life. All baseball fans should check this out it really is both an enjoyable and remarkable story.

Happy Reading and Merry Christmas to all, may Santa be nice to your library this year.