Well, it’s that time of year again.  Opportunity abounds for all, the realization of a life long dream may be in the offing and as it is always said, hope springs eternal.  The new baseball season offers hope to every baseball fan that this is finally going to be their year and their hopes of a championship will be realized.  For those involved in the game, players are hoping to get their big break while others are hoping to hang one for just one more year.  If you take a good hard look at a baseball team, all of these hopes and dreams of just about everyone lay in the hands of just one person, the General Manager.  A position of amazing power, it is also one of great sacrifice and fortitude to attain it and one that comes with some unfair criticism at times.  Today’s book takes a look at arguably one of the modern eras greatest GM’s and what it took to reach the pinnacle.

Ned Colletti can easily be described as a baseball lifer.  Landing stints for the Cubs, Giants and finally the Dodgers, he got to contribute to three of the most storied franchises in the history of the game.  Now his new book shows what it took to reach his goals as both a person and a professional General Manager.

Ned walks us through his childhood and its a compelling story about an average American kid.  Next he shows us how barely making ends meet he gets his job with the Chicago Cubs and his professional journey truly begins.  It shows the reader how with great sacrifice and perseverance great things can be accomplished.  Next we stop with Colletti in San Francisco and see how the building blocks of a transformation were laid.  Finally we travel to the Dodgers and see what its like dealing with a meddling mess of an owner while trying to build a contender.  His professional story is a fascinating one and his accolades well-earned, but its his personal story that also resonates throughout this book.

You get to see the personal side of a highly respected General Manager and quite honestly we don’t always see that in these books.  His anecdotes may be about baseball, but you get a good feel of his personality when he is telling these stories.  I enjoy books like this that I walk away getting the sense that the subject seems like a pretty decent guy in real life.  The Baseball books afford us to get closer details and some inside information about events that take place, but not always closer to the people involved.

You can get this book from the nice folks at G.P. Putnum & Sons

It would be a whole lot easier to figure out what hasn’t been said about Derek Jeter over the last twenty plus years.  Countless books have been written, articles printed and in New York the television coverage was never scarce.  Everyone has opinions of Jeter for better or worse, but it really is almost impossible to deny what he brought to the table day after day.  If you take away the fact that he played for the New York Yankees, he still would be a first ballot Hall of Famer.  With all that has been written about Derek Jeter, Danny Peary has taken a unique approach at looking at both the player on the field and the man behind the legend. 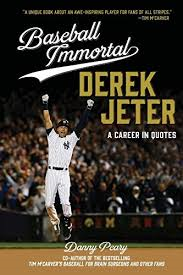 Not wanting to take the ordinary approach to celebrating Derek Jeter, Peary has assembled a compilation of his life and career in quotes.  Tidbits from everyone around him or having some sort of contact with Jeter, it produces a very unique story that is weaved sentence by sentence.  It gives a better result than that of a standard biography of the player, in the fact that in the end, you know so much more about the player and understand what makes him tick.  You can always learn a lot about a person by what those around him feel about him.

The author has pulled quotes from friends, family, other players, managers, scouts, writers, coaches, teachers, celebrities, fans and critics.  It wasn’t like he was trying to pull a select few people who would give the best quotes and allow him to paint a happy picture.  He pulled from every source available and created a tapestry that shows the complete picture of Derek Jeter.  The book is broken up into different chapter that lend a natural progression to Jeter’s life and career and help the reader follow a continuous timeline.

This is by-far the most unique approach I have come across on a book about a player.  I am not sure you would call it a biography, but I don’t think it necessarily fits well in other categories.  The approach is very refreshing and honestly enjoyable, because it allows the reader to see different information about a player that we all know so much about.  I am  not sure this approach would work for many other players.  The New York media has brought so much information forth about Jeter that it has helped create the marketing machine that is Derek Jeter in our society.

Danny Peary has done a great job with this.  It was unique and a much welcomed change in the player biography arena for me.  I really enjoyed it and think those who are not fans of the New York Yankees will even enjoy it.  The quotes keep it moving at a quick pace and present information about both the man and player without getting bogged down in cumbersome details.

Check out this book, I don’t think fans will be disappointed

Choosing the best of the best can really ignite some serious debates.  Who belongs, who doesn’t, who should be eligible and who should not even be there always makes for good conversations among friends.  The Baseball Hall of Fame, which is nestled in that sleepy little town in upstate New York, is the mecca of baseball junkies.  You can walk among some of the greatest artifacts throughout the history of the game as well as visiting the memorials to all the games brightest stars.  If you are not lucky enough to be located within a reasonable distance of the Hall like I am (2 hours), then you may not be able to get there as often as you would like or even at all for that matter.  I found a book, if you are one of the unlucky few that may never get there that will help you experience some of the magical aura that is The National Baseball Hall of Fame and Museum.

The Baseball Hall of Fame has really published a first-rate book with this one.  The quality of the book alone is incredible.  From the paper stock, to the printing this is a really nice book.  Quality of the book is something I really never comment on, but this one is really that good.

The Hall has compiled all its members, including managers, executives and umpires and given the reader in-depth overviews of every single person.  Each player section is broken down by position into its own chapter and then sorted by induction year.  It has dedicated two pages to each personality and gives a nice biography of their career as well as a brief snippet of that persons unique personality.  It is a nice feature for each person that you don’t always get in these types of books, because it is usually more focused on the career numbers.  Each person’s Hall of Fame plaque also heads their individual page so you are able to read exactly what is hanging on the wall in Cooperstown.

The other nice feature is a several page essay at the beginning of each chapter.  A player from that chapter has written about his own experiences during his career that led him to The Hall of Fame.  It is  something you don’t normally see in a Hall of Fame coffee table book and adds a real human touch to this book.  I think the Hall of Fame sometimes lacks a human touch when speaking about its members, so this brings it back to a very personal and fan friendly level.

This book covers all the players that were enshrined as of the publication date.  The only down side to these types of books is that they are not accurate for very long.  Once the next July rolls around someone is missing.  But honestly this book is done so well it should belong in every fan’s library.  You may be familiar with some of the names, but there are others that are a real learning experience for fans young and old.