Umpires are a vital part of the game.  They lay down the law and instill order on the field.  They keep the peace and pull the bodies out of the pile when mayhem ensues.  Without them, chaos would overtake the game.  Umpires could almost be considered the third team on the field, and if watched closely have their own game going on as well.  The men in black are an underappreciated bunch at best and are the only ones that have to be perfect when they start their careers and improve from there.  Today’s book looks at a Hall of Fame Umpiring career. 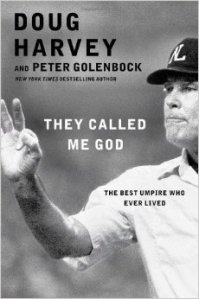 They Called Me God – The Best Umpire Who Ever Lived

Doug Harvey’s career spanned four decades in the major leagues.  He got to witness some spectacular careers during their prime and saw first hand some players who were considered part of baseballs golden age.  On the field Harvey’s work speaks for itself.  He earned his Hall of Fame induction through tireless dedication to the game and making his time on the field the best it could be.  He always tried to remain true to the spirit of the game in the quality of his umpiring and was rewarded with his induction to Cooperstown.

Now all that being said we know what a great umpire Doug Harvey really was.  Fans may not always want to admit it, but we know a good umpire when we see one.  For those fans that are not sure what a good umpire looks like, just read this book and Doug Harvey will be glad to explain why he is the best umpire ever.  He does not shy away in this book about explaining how hard he worked, and how he perfected his craft to a level above the others in the field.  Doug has no hesitation of explaining how difficult his life was before he entered baseball and the rigorous standards he has adhered to his entire life and those ideals he never wavered from.

Now please don’t think I am ripping this book.  They Called Me God is a very well written book and an enjoyable read.  It keeps the reader very interested in the story and moves along nicely.  Just have yourself prepared for a few hours of Doug Harvey telling you why he was so great.  They didn’t call him God for no reason I guess!  He reminds me of the same mold that Bob Feller was cast from.  Their generation and life was the greatest, and no one has any chance of topping it.  Call it pride, call it egotism, call it whatever you want, I just got a Bob Feller vibe from it.

Fans that enjoy the Umpires will really enjoy the book.  I don’t think the get the respect they deserve most of the time, but this book goes a long way in helping you understand one of the greats of the game.