There are players in the history of baseball that transcend all of time.  No matter how much time passes they are in conversations and debates almost on a daily basis.  Names like Mantle, DiMaggio, Williams,  Mays, Aaron, Bonds and Rose are all names that will forever be talked about and for the most part held in high regard.  Regardless of their transgressions on and off the field they are still beloved by many.  There are others that the exact opposite is true of.  One such person is Ty Cobb. More than a few books have been written about The Georgia Peach and his exploits and honestly up until now most have not been complimentary.  There was a new book published this year that attempts to change how we feel about Ty Cobb. 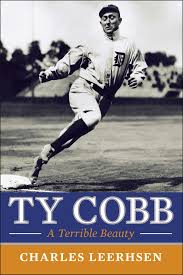 Charles Leerhsen took on a pretty big task in trying to change Ty Cobb’s image.  It seems we as baseball fans and as a society were pretty set in our opinions of Cobb.  We accepted the facts that he was a cut throat player willing to win at any cost.  We also accepted the fact that he was a raging racist during his life.  Basically we all were comfortable accepting the fact that he was an all around SOB.  Through other books that were written, most of these facts were able to be backed up by stories and first hand accounts, and even though we now know a few may have been fabrications, we were all pretty set in our opinions.  But what if we are wrong?

The author, through newspaper articles, interviews and some of Cobb’s own writings has tried to get to the real man behind the image.  He does an in-depth look at the personality and the behavior of the man set in his own era.  He attempts to dispel rumors, expose certain truths as fraud and show the gentler, kinder side of ole’ Ty.

This book gets its point across very eloquently and does pose some very interesting questions for the reader.  Perhaps the biggest question I had at the end of this is were we wrong?  I don’t know for sure honestly, but it definitely has raised some serious questions in my mind.  Cobb’s grandson Herschel wrote a book about Ty last year and that to me started the ball rolling in my mind that maybe we have the story a little skewed.  I finished the book and still in my own mind have no definitive answers on Ty Cobb, but I have opened up to the possibility that the accepted story may not at the very least be accurate.

I recommend this book to any and all baseball fans because if nothing else it will start to make you wonder.  It is written very well and moves along nicely.  It is not a mindless biography and it forces the reader to contemplate whether they still accept the opinions we have previously accepted as fact.  Maybe someone will also help me figure out what I think about the whole subject, because I am still not sure.