I have mentioned before how I find it odd  how certain great players get lost to the passage of time.  I don’t know if that is a product of playing for a smaller market team, playing in the shadow of a teammate or them being the type of player that does not seek the spotlight of the media.  Whatever the case may be, today’s book takes a look at one of those players that left a huge mark on the field but never seems to get the full recognition he deserves. 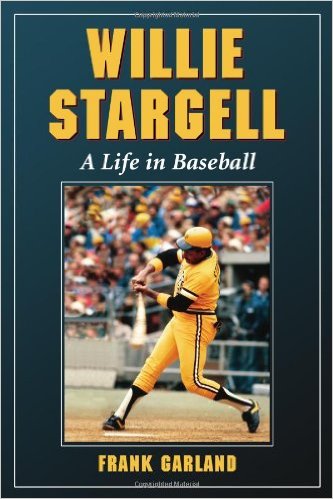 Over the past year I have talked on here about two or three other Willie Stargell books.  I have come to the same conclusion with each one that he was an extremely underrated player that was finally getting his deserved props even if they were coming posthumously.

Frank Garland takes an approach to Willie Stargell that is in many ways like the other books.  Looking at his upbringing in California, through his time in the segregated minor leagues to his rise to stardom as member of the Pittsburgh Pirates that culminated in immortality in Cooperstown.  Garland’s research  is very thorough and paints a very detailed and complete picture of Willie Stargell the baseball player.

What is different about this book from the others out there is Garland takes his research beyond just the field.  He gets involved in the story line of Stargell’s life after baseball. This area is one place where the other biographies fail in comparison.  This book shows Willie’s love and involvement in the classical music scene after his retirement.  It also shows his involvement as a coach with the Atlanta Braves.  Many people forget that Willie was a coach in the Braves system and his tutelage left an undeniable mark on some of their up and coming big league prospects.  These are the same prospects that when they finally came to the big leagues won 15 or so division championships.  It shows the knowledge Stargell possessed and how he was able to pass it on to a new era of superstars.

This book is another example of giving Willie Stargell his accolades while presenting some different aspects of the player and the man.  If you have read other Stargell biographies you may find some of what is talked about repetitive, but in the end it does present some new information that was not included in other books.  The book does move along at a moderate pace and allows the reader to stay engaged with the story.

I have yet to figure out why Willie Stargell is relegated to the shadows.  Is it playing in Pittsburgh his entire career, is it the quiet strength he brought to his team or is it playing in the shadow of Robert Clemente?  I am not sure if it is all or any of these but they are reasonable questions to ask.  For this fan though, it is nice to see Willie Stargell remembered for being the superstar that he was both on and off the field.

You can get this book from the nice folks at McFarland

Willie Stargell- A Life in Baseball

I have mentioned in the past, that through the passage of time some players lose their magic.  Sometimes locale plays a factor, other times it may be a great player on a crappy team and then there are the times when a player gets overshadowed by his own teammates.  Such is the case with today’s book, and its nice to see this player get some book time.

Willie Stargell spent his entire career as a member of the Pittsburgh Pirates.  They won a couple of Championships during his time and became a powerhouse for the Iron City that was tough to beat.  When people think of the Pirates, automatically Roberto Clemente is the first one they speak of.  He gave up his life doing something for his fellow man in need, and created a legacy that stands the test of time.  But what about Willie Stargell?  He played many great seasons and sometimes gets forgotten in the shadows of Clemente’s legacy.

This book is not a new release but it is one of very few out there on the market about Willie Stargell.  It takes a very nice look at Willie’s career with the Pirates as well as an in-depth look at Willie’s personal life.  The personal side of Willie is something new for me.  We all are familiar with the career but I always felt he may have been a fairly private person and that may have effected what we were able to know about him.

His untimely death in 2001 may also have played a part in not always getting the recognition he ultimately deserved.  So this book does give him some of the praise he earned and is more thorough than the biography that was first published on Willie in the early 80’s.

Since Willie is a Hall of Famer, his appeal will transcend Pittsburgh.  Fans from all over the world should enjoy this book.  Its a look behind the curtain, if you will, of a man we honestly don’t know that much about.  Dozens of books have been written about his teammate, and now almost 30 years later there is finally another one written about Willie.  Check it out because I don’t think fans will be disappointed.

Before I read this book I had what I thought was a pretty accurate opinion of Al Oliver.  As a player, I felt he was often overlooked in terms of the quality of his play and his final career numbers.  As a person I felt he came off as a grumpy guy.  The personality take was based on the very limited media exposure I saw of him when he played for the Phillies briefly near the end of his career in 1984.   He just came off as a guy who wasn’t very friendly when interviewed.  After reading todays book it looks like I was wrong about Ol’ Scoop.

This book pleasantly surprised me.  Al Oliver really delivered with a pleasant account of his life, career and faith.  He goes into great detail giving you the inside “scoop” on his childhood, friends and family life.  You get an honest glimpse of the man himself outside of baseball.  He is like any other human being on this earth with family issues.  He does not hide from any of the issues (good or bad) and shows how his faith has made him a better person and guided him through these issues.  As far as the man himself goes, this book has improved my personal perception of Al Oliver.  He really wasn’t the grump that came across on the TV screen.  He was just very intense and a somewhat private person.

On the career side of things I always knew Al Oliver was a good player.  I just never realized how good.  The book has several detailed pages of his hitting and fielding stats.  Which leads me to my next question, why has he been overlooked so long for the Hall of Fame?  With the types of numbers Oliver put up during his career, which are better than some of the others that have already made the Hall during his era, it makes me wonder why.  Al Oliver also I think has the same questions in the book, but it is not a bitter former player asking why.  He has said several times in the book if it is God’s will then it will be.  Which is a great attitude and belief to have if you are in his position.  It again shows his strength in his own faith.

Getting back to the question of why hasn’t Al Oliver made the Hall of Fame.  I have no idea personally as to why.  The man’s numbers speak for themself.  With career numbers like this,  he belongs in the Hall.  Which now leads to another sticky topic of the Hall of Fame being a popularity contest with the writers.  Perhaps several of the writers that would have voted for Al, got the same impression of him that I had previously.  Perhaps some of those writers should read this book and get perspective on who the man actually is.  Perhaps it would put some long-held grudges to rest.

Overall I enjoyed this book.  It was a very quick read that I finished in an afternoon.  The book is very heavy on pictures but gives you a comprehensive look in to his personal and professional life.  Baseball fans that were around when Al played should really enjoy it.  The book is being release on 9/30/14 and is available from two sources that I know of:

From the publisher at http://www.vippublishing,com

or direct from Al oliver at http://www.al-oliver.com where I think you can get a signed copy.