There are times when successful teams become monsters.  Not necessarily just on the field.  In the annals of history the teams legacy can become grander than they ever really were, and take on an entire life of their own.  One such team that I feel has taken on a new meaning as time has marched on is Charlie Finley’s Oakland Athletics.  The team was born of a time before free agency and assembled through the farm system and trades.  The end result of that work was the formation of a powerhouse that may never be duplicated in the future.  1971-1975 was a magical time to be a Oakland A’s fan.  This book we are looking at today helps us relieve the magical era by the bay. 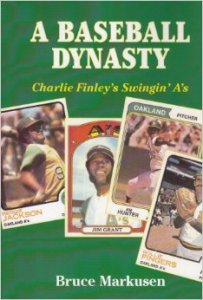 What is there not to love about the 70’s????  Handlebar mustaches, bell bottoms, disco and of course the almighty Oakland A’s.  They were the hands-down the most dominating powerhouse of the American League in the first half of the decade, and produced a legacy that would be destroyed by the advent of free agency as well as the miserly ways of their owner Charlie Finley.

The A’s on the field were virtually unstoppable.  Multiple trips to the World Series in the early 70’s as well as a few rings to boot, made them the favorite to repeat each year.  With stars such as Reggie Jackson, Vida Blue, Catfish Hunter, Rollie Fingers, Mudcat Grant, Gene Tenace and Sal Bando, they were almost unstoppable.  With this many elite stars assembled on one team, of course drama would not be far behind in Oakland.

Bruce Markusen has assembled a nice collection of stories on the A’s during their dynasty years.  Through exhaustive research he has created several analyses on what made the A’s such a formidable team and what led to such a prolonged success.  This newer updated version also has interviews with some of the players and behind the scenes stories that really bring the Oakland A’s to life.  Of course since it is the Charlie Finley Oakland A’s we are talking about here, you get stories and details about all the bickering and in-house disputes between teammates, managers and the front office.  It does paint a very good picture of the A’s figured out how to win on the field and become a powerhouse, in spite of their behavior off the field.  They easily rivaled, if not surpassed any Steinbrenner run team in the drama department.

The author has written a very enjoyable book if you have an interest in the A’s.  It shows an inside look at a team success that we as fans, will be hard pressed to see again in modern baseball.   One can only imagine if the A’s had an owner other than Charlie Finley, how much more success they could have attained in the latter half of the 70’s